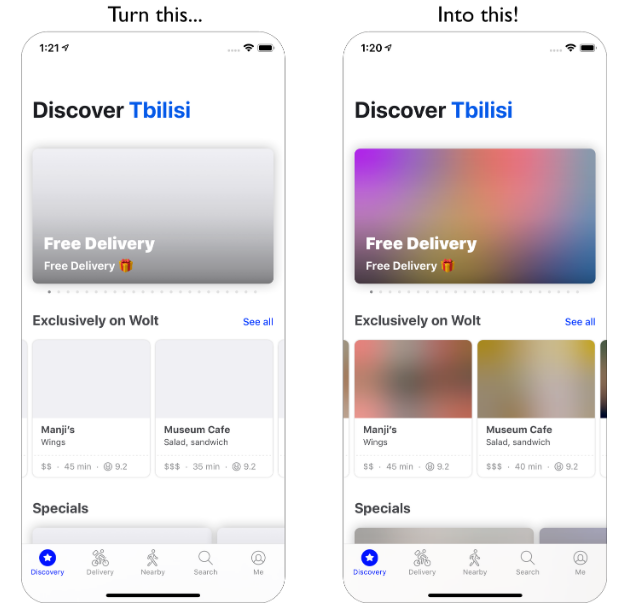 BlurHash is a compact representation of a placeholder for an image. Instead of displaying boring grey little boxes while your image loads, show a blurred preview until the full image has been loaded.

The algorithm was created by woltapp/blurhash, which also includes an algorithm explanation.

The decoders are written in Swift and Kotlin and are copied from the official woltapp/blurhash repository (MIT license). I use light in-memory-caching techniques to only re-render the (quite expensive) Blurhash image creation when one of the blurhash specific props (blurhash, decodeWidth, decodeHeight or decodePunch) has changed.

See the example App for a full code example.

To run the example App, execute the following commands:

This library also includes a native Image encoder, so you can encode Images to blurhashes straight out of your React Native App!

Because encoding an Image is a pretty heavy task, this function is non-blocking and runs on a separate background Thread.

The performance of the decoders is really fast, which means you should be able to use them in collections quite easily. By increasing the decodeWidth and decodeHeight props, the performance decreases. I'd recommend values of 16 for large lists, and 32 otherwise. Play around with the values but keep in mind that you probably won't see a difference when increasing it to anything above 32.

All times are measured in milliseconds and represent exactly the minimum time it took to decode the image and render it. (Best out of 10). These tests were made with decodeAsync={false}, so keep in mind that the async decoder might add some time at first run because of the Thread start overhead. iOS tests were run on an iPhone 11 Simulator, while Android tests were run on a Pixel 3a, both on the same MacBook Pro 15" i9.

As you can see, at higher values the Android decoder is a lot faster than the iOS decoder, but suffers at lower values. I'm not quite sure why, I'll gladly accept any pull requests which optimize the decoders.

Use decodeAsync={true} to decode the Blurhash on a separate background Thread instead of the main UI-Thread. This is useful when you are experiencing stutters because of the Blurhash's decoder - e.g.: in large Lists.

React native Skeleton Content, a simple yet fully customizable component made to achieve loading animation in a Skeleton-style. Works in both iOS and Android.

react-native-tesseract-ocr is a react-native wrapper for Tesseract OCR.