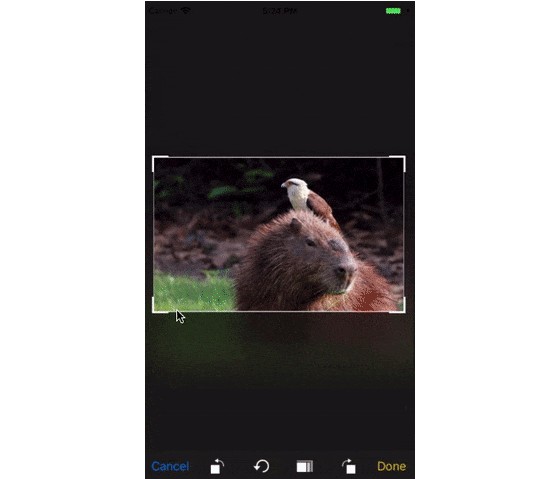 This library is iOS only right now - Android coming soon, I hope. This is to fulfill a specific need of a dynamic image cropper for both platforms that isn't available in a neat NPM package.

Hurry up on all the cool backend stuff for a certain project so I can work on this library!

Add the following library - can I create a Kotlin bridge? Is that wise? Because I use Kotlin at work, and it is the bee's knees.
https://github.com/Yalantis/uCrop

Cocoapods support only - the library is a react-native wrapper for another library, so we use Cocoapods to manage all of our dependencies. Make sure you have the Cocoapods gem installed.

Working on this library

So, basically what I've found is the easiest way to do it (at least for iOS) is to react-native init a new project.

When you have the files working the way you want, clone the repo, change the files to match the above edited ones (check iOS/src/*), then PR.

I have a script that automates the app setup with a working App.js, moving images to the correct places, etc.

I will add it here. Or implement actual test files. I'm not 100% sure what I'm doing, I just want to make this available for other people.

This React Native component ImageEdit allows you to edit images inline for cropping.

A quick and easy image slider for react native.

A React Native library to show images grid in chat messages like your favorite platforms!