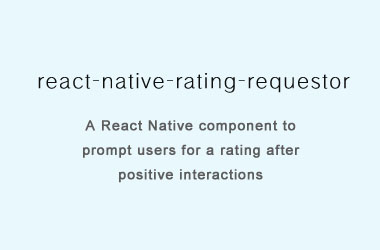 The Rating Requestor is a very simple JS module that you simply instantiate and call from time to time, as your user performs actions that result in a "happy path." For example, maybe your users get a smile on their face every time they save money with your app, beat a level, or clear out their inbox. After a certain number of these positive events, it might be a good time to ask the user for a review.

Import and create a new instantiation of the Rating Requestor somewhere in the main portion of your application:

When a positive UX event occurs, let the Rating Requestor know so that it can keep track of these:

The example above is used without callback. A callback can be provided that reports on result of the handling. The callback accepts two parameters: the first indicates whether the request dialog appeared (boolean), and the second returns the user decision (string: 'decline', 'delay', or 'accept').

You can also trigger the rating dialog to appear immediately by invoking RatingTracker.showRatingDialog([callback]). If you have a "Rate this App" button or link in an about page or something in your app, this would be a good place to use that.

All configuration occurs on the construction of a new RatingRequestor.

You must pass in a string as the first parameter, which is the app store ID of your application. Optionally, but highly suggested, is a second parameter: a set of options to customize the request dialog and the timing of the dialog. This object follows this pattern:

As of version 2.0.0 this package is compatible with both iOS and Android.

A React Native component for generating and displaying interactive star ratings. Compatible with both iOS and Android.

You can interact with the component by either tapping on a feeling or by dragging the colored emoji horizontally.