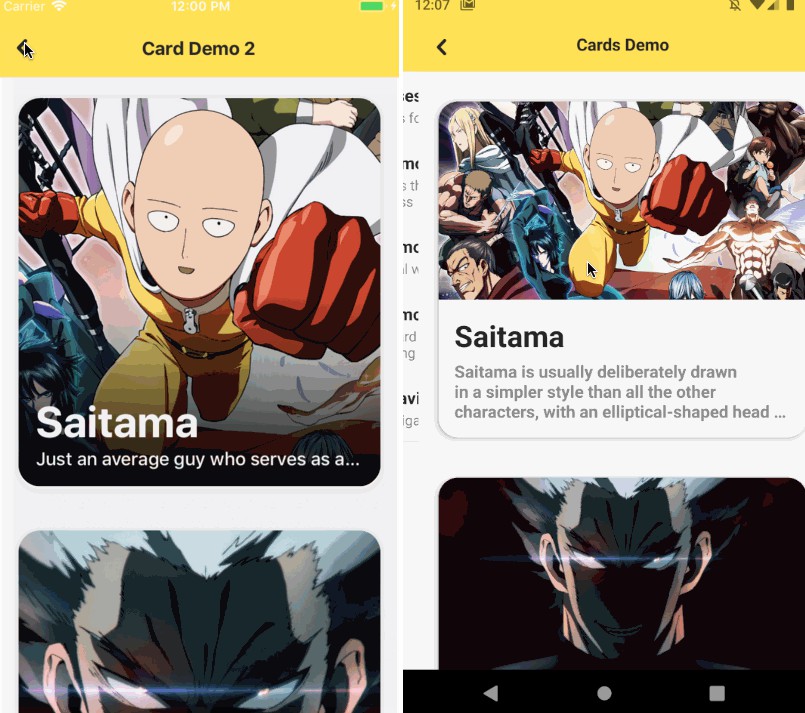 This library in itself is not a Navigation- or Router library. Instead, it provides a set of comprehensive full native building blocks for performing shared element transitions in Router- or Transition libraries.

Shared-element transitions add shine to your app but can be hard to do in practise.
It's possible to achieve some nice transitions by building custom modals and using the the core react-native API, But this also brings with it many restrictions. Things like resizing an image or making sure no "flicker" occurs even an older Android devices can be a real challenge.

This library solves that problem through an all native implementation which is very close to the metal of the OS. It solves the problem by providing a set of "primitives", which don't require any back and forth passes over the react-native bridge. This way, the best possible performance is achieved and better image transitions can be accomplished. The following list is an impression of the kinds of problems that are solved through the native implementation.

This library is under active development. The iOS and Android implementations are mostly done, which exception of some edge cases.
The library also aims to support the web platform with an optimized DOM implementation. That development hasn't started yet.

And optionally link when needed

react-native-shared-element is a "primitive" that runs shared element transitions
entirely native without requiring any passes over the JavaScript bridge. It works by taking in a start- and end node, which are obtained using the <SharedElement> component.

Whenever a transition between screens occurs (e.g. performed by a router/navigator), a view in
front of the app should be rendered to host the shared element transition. The position prop is used to interpolate between the start- and end nodes, 0 meaning "Show the start node" and 1 meaning "Show the end node".

Whenever the <SharedElementTransition> component is rendered, it performs the following tasks:

You typically do not use this component directly, but instead use a Router or Transition-engine which provides a higher-level API.
See ./Example/src/components/Router.js for an example implementation of a simple stack router using
shared element transitions.

The <SharedElement> component accepts a single child and returns a node to it through the onNode event handler. The child must correspond to a "real" View which exists in the native view hierarchy.

The transition effect can be controlled using the animation, resize and align props.
In most cases you should leave these to their default values for the best possible results.

If however the start- element and end elements are visually different, then it can make
sense to choose different values. For instance, if you are transitioning from a <Text>
with a white color to a <Text> with a black color, then using animation="fade" will
create a cross-fade between them.

Another case is when you have a single-line of <Text> in the start- view and a full
description in the end- view. A stretch effect would in this case not look good, because
the end- element is much larger in size compared the start- element.
In this case you can use resize="clip" and align="left-top" to create a text reveal effect.

When auto is selected, the default alignment strategy is used, which is center-center.

This React Native component ImageEdit allows you to edit images inline for cropping.

React native demo application that integrated with Github V3 APIs. This project can be used as a clear, clean and well-designed react native boilerplate.