The react-native-ads-facebook has been automatically linked for you, the next step will be downloading and linking the native Facebook SDK for both platforms.

Make sure you have the latest Xcode installed. Open the .xcodeproj in Xcode found in the ios subfolder from your project's root directory. Now, follow all the steps in the Getting Started Guide for Facebook SDK for iOS. Along with FBSDKCoreKit.framework, don't forget to import FBAudienceNetwork.framework.

Next, follow steps 1 and 3 from the Getting Started Guide for Facebook Audience. Once you have created the placement id, write it down and continue to next section.

If Build failed on release see #3

Suggestion: Use CocaPods If you want to save your time fixing random issue

Interstitial Ad is a type of an ad that displays full screen with media content. It has a dismiss button as well as the clickable area that takes user outside of your app.

They are displayed over your root view with a single, imperative call.

In order to show an ad, you have to import InterstitialAdManager and call showAd on it supplying it a placementId identifier, as in the below example:

Method returns a promise that will be rejected when an error occurs during a call (e.g. no fill from ad server or network error) and resolve when user either dimisses or interacts with the displayed ad.

Native Ad is a type of an ad that matches the form and function of your React Native interface. 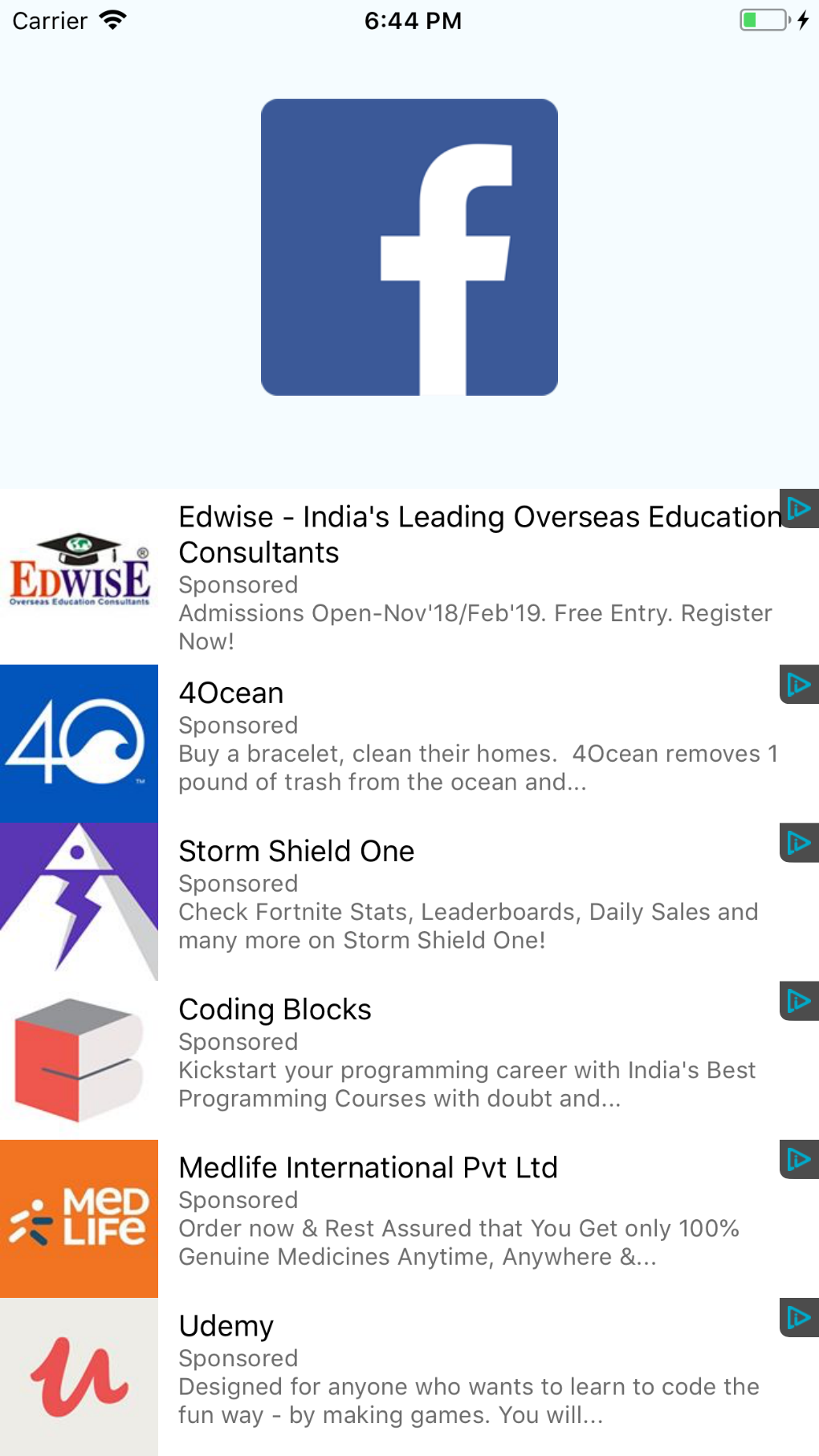 In order to start rendering your custom native ads within your app, you have to construct
a NativeAdManager that is responsible for caching and fetching ads as you request them.

After creating adsManager instance, next step is to wrap an arbitrary component that you want to
use for rendering your custom advertises with a withNativeAd wrapper.

It's a higher order component that passes nativeAd via props to a wrapped component allowing
you to actually render an ad!

The nativeAd object can contain the following properties:

** Note: ** Don't use more than one MediaView/AdIconView component within one native ad.

** Note: ** To make any text Triggerable wrap it in use only component

Finally, you can render your wrapped component from previous step and pass it adsManager
of your choice.

BannerView is a component that allows you to display native banners (know as AdView).

Banners are available in 3 sizes:

In order to show an ad, you have to first import it BannerView from the package:

Later in your app, you can render it like below:

Provides a mechanism to fetch a set of ads and then use them within your application. The native ads manager supports giving out as many ads as needed by cloning over the set of ads it got back from the server which can be useful for feed scenarios. It's a wrapper for FBNativeAdsManager

By default the native ads manager will refresh its ads periodically. This does not mean that any ads which are shown in the application's UI will be refreshed but simply that requesting next native ads to render may return new ads at different times. This method disables that functionality.

Sets the native ads manager caching policy. This controls which media from the native ads are cached before being displayed. The default is to not block on caching.

Note: This method is a noop on Android

InterstitialAdManager is a manager that allows you to display interstitial ads within your app with a single call.

Loads an interstitial ad asynchronously and shows it full screen by attaching a view onto the current root view
controller.

Promise will be rejected when there's an error loading ads from Facebook Audience network. It will resolve with a
boolean indicating whether user didClick an ad or not.

On Android you have to add following activity to AndroidManifest.xml

Note: There can be only one showAd call being performed at a time. Otherwise, an error will be thrown.

Registers given device to receive test ads. When you run app on simulator, it should automatically get added. Use it
to receive test ads in development mode on a standalone phone. Hash of the current device can be obtained from a
debug log or AdSettings.currentDeviceHash constant.

All devices should be specified before any other action takes place, like AdsManager gets created.

Clears all previously set test devices. If you want your ads to respect newly set config, you'll have to destroy and create
an instance of AdsManager once again.

Note: This method is a noop on Android.

Configures the ad control for treatment as child-directed.

If an ad provided service is mediating Audience Network in their sdk, it is required to set the name of the mediation service

Sets the url prefix to use when making ad requests.

Note: This method should never be used in production

In order to see ads you will have to create your own placementId and use it instead of the one provided in the examples.