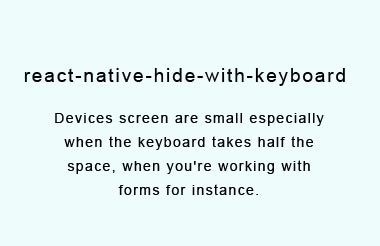 Devices screen are small especially when the keyboard takes half the space, when you're working with forms for instance.

One of the best way to handle that is to hide part of the view when the keyboard shows up.

Show components when keyboard is shown

In the case that you want to do the opposite, there is also ShowWithKeyboard which only shows a component when the keyboard is displayed. To use this, instead import react-native-hide-with-keyboard like so:

Add your own component inside this lightweight KeyboardStickyView, whether it be TextInput, Buttons, or who knows what! Supports both Android and iOS.

Software/virtual numeric keyboard, which can be used instead of Android/iOS ones if it suits your app style better.

This library provides most of the capabilities for an application to display pre-loaded images when offline.