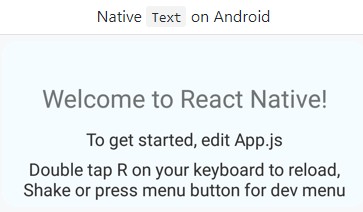 React Native's built-in components render slightly different on iOS and Android, causing you to spend extra time making the UI more consistent across devices. For example, did you know that when you create a fresh project using react-native init, the color of a <Text/> is by default #000000 on iOS and #808080 on Android?

This project provides you with slightly adjusted adaptions of built-in React Native components with the goal of being more consistent between platforms. Think of it as normalize.css for React Native.

To be clear, these are not bugs in React Native, rather RN opts to preserve the default behavior on each platform as much as possible. Nonetheless, you might prefer to use components that behave more consistently.

Screenshot shows a Text on OxygenOS which is bold and inside a <View style={{flexDirection: 'row'}}> container, triggering the bug.

This is a Native Module for React Native that allows integration of Wowza's GoCoder SDK in less time.

This is an opionated configuration for typescript react native project.

Easy to use & awesome helpers for React Native.

A helper component meant to be used as a drop-in replacement for RN TextInput to allow automatic expanding of a multi-line text input according to the number of lines.

Here is a light weight content loader for you.