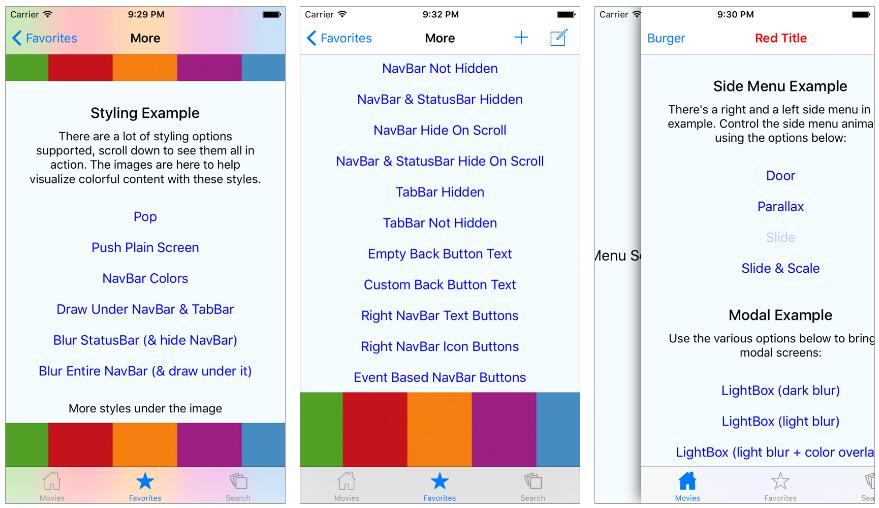 react-native-controllers is a React Native npm extension package for iOS which provides a completely native skeleton for iOS apps, allowing you to easily wrap core native UI components without compromising on the native experience. Key benefits:

Note: The main purpose of this package is to generate discussion around difficulties we found wrapping native iOS skeleton components with React Native. Look at this as a thought experiment with a proposed solution. If you have alternate ideas please share your feedback!

Why do we need this package?

If you're already convinced you need this package, you can skip straight to Installation. If not, brace yourself for a long read.

At Wix, we came to React Native from a codebase of two separate fully native stacks - one for iOS (ObjectiveC) and one for Android (Java). The main benefits React Native brings to such an environment are:

The last point is critical and what prevented us from adopting many of the cross-platform mobile technologies that popped up in recent years. One of the premises of React Native is that you can keep using any native UI component and won't be required to make UX compromises.

But wait.. the UX compromises did come

After working with React Native we noticed that we were encouraged to make UX compromises in several places. Here are two examples:

It's interesting to see that both examples revolve around components that are parts of the app skeleton. Why are skeleton components so challenging to implement with native elements?

Looking for the underlying challenge

Our first instinct for both of the examples listed above was "Hey, great! Let's make these components ourselves! It's a great void to fill for the community."

We dived into the NavigatorIOS implementation but things weren't as simple as we've hoped. The implementation is surprisingly complex and seems to have been done by someone very much proficient with the inner workings of the UIKit.

We've hit similar walls with the side menu. One of the main problems was that side menus are based on UIViewController and not UIView. React Native steered our component to return a view.

The entire React Native component hierarchy is contained inside a view and this view is wrapped manually in a view controller. That pretty much summed up our problem. App skeletons in iOS are built from view controllers, but it wasn't obvious to us how those fit in within the React Native world.

Giving view controllers a prominent seat at the table

If our assumption is correct, then giving view controllers a more prominent seat at the table might make skeleton components easier to implement.

There are many ways to approach this, we've decided to start with a way that won't interfere with the inner-workings of React Native. A good start would be an optional npm package that would add this functionality on top.

This means that instead of a single RCTRootView, our app will have several ones running in parallel. It turns out that this isn't a problem and is supported out of the box by the framework. All you need to do is have a single RCTBridge that all of them will share. This gives all of these views the same JS execution context, which means they will easily be able to share variables and singletons.

Let's compare the two approaches with a simple two-tab app. UITabBarController is a good candidate for a skeleton component since it's based primarily on view controllers: 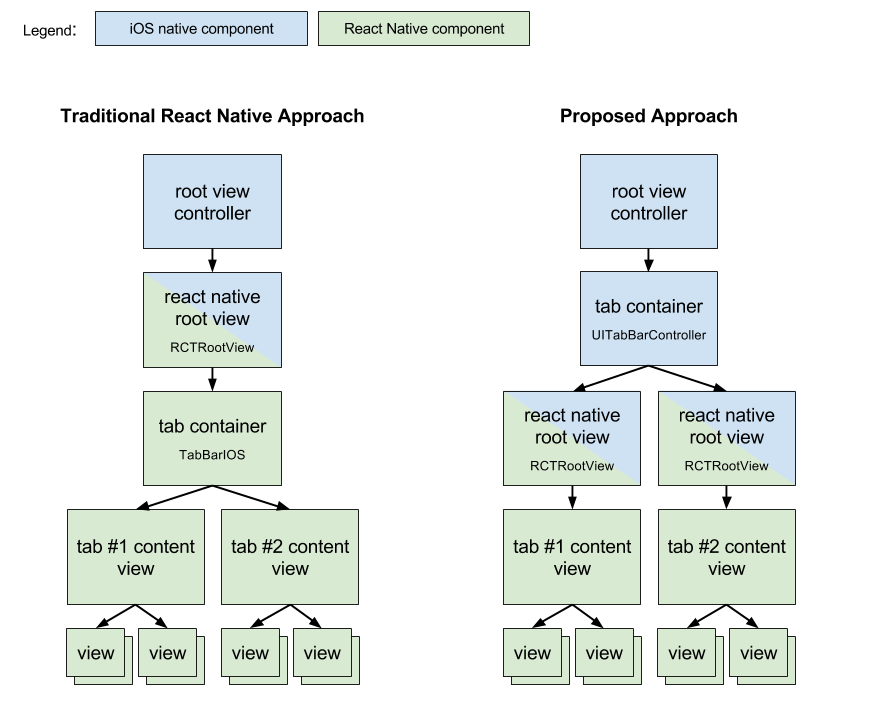 The basis of the proposed approach is that the view controller layer is not implemented as traditional React Native components. Instead, they are implemented natively. We also want to make layouting very flexible so instead of having to write native ObjectiveC code inside Xcode to specify which view controllers you want, we prefer a declarative way.

The natural choice to define layouts is using XML. This implies that we need to add an additional XML layout file to the project that will be saved right next to the React Native JS bundle. The native package code will then parse this XML file and instantiate the native view controllers when the app is loaded.

The drawbacks of this external XML is that it's more difficult to update. React Native developers are used to updating everything though the JS bundle. This means the natural place for our XML is to be embedded inside the bundle. This makes for another natural choice for the XML flavor. It should be JSX to keep things familiar.

It isn't straightforward to use JSX for layouting things that aren't React components since JSX is tightly coupled with React. Our somewhat hackish solution was to override React in the JS modules dedicated for defining view controllers.

What sacrifices did we make?

By using the proposed approach, we made several scarifices that you should be aware of:

Important: Make sure you are using react-native version >= 0.25.1

Check out the iOS example project under ./example to see everything in action. For a detailed explanation of how to modify your project, follow the 3 steps below:

Since react-native-controllers takes over the skeleton of your app, we're first going to change how React Native is invoked in AppDelegate.m. In Xcode, change your AppDelegate to look like this:

Roughly speaking, ViewControllers make the skeleton of your app and Views make the actual content of every screen. Since index.ios.js is where your skeleton is defined, this module will be dedicated to deal with ViewControllers. Normally, this would be the only module that does that and the rest of your JS files will be regular React Native files.

You can see a complete example of index.ios.js here. If you don't want the full explanation of what's going on in there, just skip to the next step.

Making a module deal with ViewControllers instead of Views

To allow you to use JSX to define your view controller hierarchy, we're going to have to hijack React. Don't worry, this hijack is local to this module only. That's why we don't mix the two types. Your other regular JS modules (that deal with Views) won't have this hijack.

To perform the hijack, define React on the top of the module like this:

Note: The React instance here is irregular. It can't do many of the things that the original class can, so keep its usage pretty close to our purpose.

We tried to keep the syntax familiar. Define your view controller skeleton like this:

Note: In this hierarchy you can only use view controllers. You can't use your traditional React Native components. For a full list of all supported view controllers see the rest of this doc.

Some of the view controllers in the hierarchy will have to contain your views. These views are the regular React Native components that you're used to. You will normally define these components in a dedicated JS module - where React wasn't hijacked and you can use all of its goodness.

To hook up a view, use the component attribute of the view controller in the JSX and provide the registered name of the component. Every view that you use has to be registered using AppRegistry.registerComponent(). For example, the movie list screen content is defined in MovieListScreen.js and there it's also registered with:

Require all the view components that you referenced

We have to tell the React Native bundler that we need the components that we just referenced. The easiest way to do this and make sure their JS files are included in our bundle, is to require them. You can add this right before you define your view controller hierarchy:

Register your controller and set it as root

The view controller hierarchy we've defined in index.ios.js references the top level screens of your app. These screens are regular React Native views. They are the exact same components you've been writing up until now.

As you can see, these are standard React Native components. They don't require any special changes due to our package. The only requirement is that all of them are registered using React Native's AppRegistry.registerComponent(). Only top level components referenced by the view controller hierarchy need to be registered. Register them by adding the following line at the end:

When implementing your components, you may need to interact with one of the view controllers. For example, create a button that pushes a new screen to the navigation controller. You have simple JS API for this purpose available by require('react-native-controllers'). This API is documented under the list of available view controllers.

Helper component to assist with adding custom views to the bottom of the navigation bar. You can see this UI pattern in the native iOS Calendar app (week days in the day view) and the native iOS Health app (segmented control in the dashboard tab).

This pattern can be implemented by adding a React component in your screen component's content (not really on the nav bar) and making it stick to top (using absolute position). The illusion that this component is part of the nav bar is achieved by wrapping it with NavigationToolBarIOS which provides a background with the same translucent effect the nav bar has.

You can see a working example of all this in the example project.

Note: In order to position this component immediately below the navigation bar, we use {position: 'absolute'}. In addition, to make sure z-order is correct and this compoenent is rendered over the rest of the content, add it as the last component in your hierarchy (inside your screen component render method).

The package contains implementations for the following view controllers that you can use in your app skeleton:

These wrappers are very simple. You can also add your own if you find missing React Native components that are based on UIViewController instead of UIView.

Native navigator wrapper around UINavigationController. This view controller is a replacement for React Native's NavigatorIOS that is no longer maintained by Facebook.

Get the instance with Controllers.NavigationControllerIOS(id)

You can apply styling to the navigation bar appearance and behavior by setting the style property when defining your NavigationControllerIOS or by passing the style object when pushing a new screen.

Please note that some styles (usually color related) are remembered for future pushed screens. For example, if you change the navigation bar color, all future pushed screens will keep this style and have the same changed colors. If you wish to have different colors in a pushed screen, simply override the style by passing the style object when calling push(). Every style that is remembered across pushes is documented as such below.

All styles are optional, this is the format of the style object:

Note: If you set any styles related to the Status Bar, make sure that in Xcode > project > Info.plist, the property View controller-based status bar appearance is set to YES.

See all the styles in action by running the example project in Xcode (under the "Favorites" tab).

Native side menu drawer wrapper around MMDrawerController. This view controller lets you add a configurable side menu to your app (either on the left, right or both). Unlike most side menu implementations available for React Native, this side menu isn't implemented in JS and is completely native.

Get the instance with Controllers.DrawerControllerIOS(id)

You can apply styling to the Drawer appearance and behavior by setting the style property when defining your DrawerControllerIOS.

All styles are optional, this is the format of the style object:

See all the styles in action by running the example project in Xcode (under the "Movies" tab, side menu section, try to press "More..." button in order to show more cool drawer options).

Native tabs wrapper around UITabBarController. This view controller lets display native tabs in your app, much like React Native's TabBarIOS.